Good Contents Are Everywhere, But Here, We Deliver The Best of The Best.Please Hold on!

Battle of Hastings 950 year anniversary – what did the Normans ever do for us?

The Battle of Hastings is probably the most famous battle in English History. On Saturday 14th October 1066 the last Anglo Saxon King of England, Harold Godwinson, and his army were beaten by William the Great’s Norman Army. It was 200 years later that his became known as William the Conquerer, at the time of the battle is was William the Great or, to his enemies, it was Norman the Bastard – a reference to his being born out of wedlock to the mistress of Robert I, Duke of Normandy. 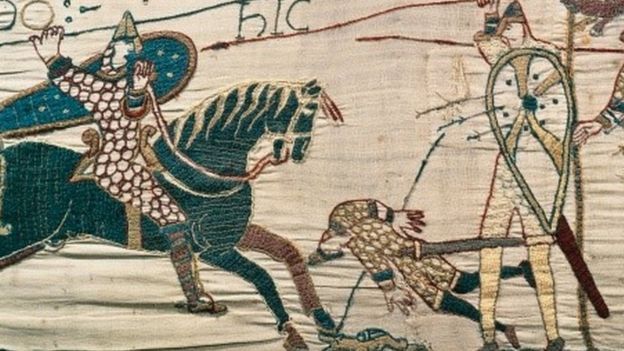 About 6,000 Saxon soldiers marched to the site of the battle, a field about 10 km from the town of Hastings and now the site of a town called Battle. They had marched over 400 kilometres from Stamford Bridge near York having just defeated a Viking Army from Norway. They were confronted by 7,000 Norman soldiers, in day long confrontation, resulting in over 10,000 deaths. This tally included the 43 year old Saxon King Harold, who was only 9 months into his short reign. Legend has it that he was killed by a arrow in the eye, a fact depicted in the Bayeux Tapestry. His body was never found.

The course of history was changed forever. The victorious Norman became William I of England and promptly replaced the Saxon aristocracy with a French speaking elite who introduced common law and the Domesday Book.

The impact of William’s victory on England was immense. There were changes in the church, language and culture that still exist today. In respect to the language, Norman French became de rigueur, the language of the court. In many respects England was divided, Saxon serfs and Norman masters. the Normans spoke French and the serfs a form of Saxon English.

To read the transcript of this video click here.

Saxon English was influenced by the harsh Germanic and Scandinavian sounds and Norman French with its Latin origins. As time passed the languages began to morph together. Most people know of how Saxon serfs (serf also being a word of French origin) tended their cows, sheep and pigs and then served them to their masters as beef, mutton and pork.

For example, because of the period of the invasion and the domains where the Normans had a large influence, much English vocabulary in the domains of military, politics, economics, law and cuisine is of French origin.However, tone outcome of this blending of the two languages has resulted in  the actual knowledge of French vocabulary by the English being much greater than one would think.

I have read this quote many times and I’m unsure who should be credited with this gem, perhaps it was Georges Clemenceau (1841-1929) – French Prime Minister. However, there are other suggestions including musketeer d’Artagnan (perhaps more properly Alexandre Dumas) and most recently, language guru Michel Thomas.

In fact Michel Thomas basically builds much of his language teaching method around the very fact that, such are the similarities between French and English vocabulary, you could almost treat it like a code breaking exercise.

It is important to note however that there are numerous false friends – faux-amies!

I mentioned earlier that Norman French was the language of the ruling classes. It follows therefore, that what remains of the French influence within the English language remains within  that stratum of the language. In other words, social or street English  has continued to evolve at a very fast rate influenced from all corners of the globe but the more formal English remains with its French heritage clearly visible. In today’s world we can see it in the language of law, politics and perhaps most applicable, in business.

For a classic example, look at the French verb proposer. It is a frequent error that natural French speakers translate this verb directly to the English to propose. In fact the majority on the majority of occasions, what they actually mean is to suggest, because the English verb to propose is a very formal suggestion – for example:

I have a business proposition for you

He has proposed marriage to her.

In both cases there is the anticipation of a contract at the end of the process, not evident in the following examples:

Can I suggest that we break for lunch

I don’t know which one to buy, what do you suggest?

I these examples,  the arrangement is far more informal, this being the key deciding word, is the concept being described formal or informal.

Obviously, the French were not the only influence on the English Language. The language has continued to evolve at an incredible pace , further impacted by Shakespeare, science, the British Empire and the internet, to name but a few. However, the fact remains that within the English language is imbedded much French vocabulary, a real bonus for the  francophonie learner. Of course there are the rules of grammar and intonation and  pronunciation  –  all the other things that your school English teacher kept telling you were so important. Despite all that, and thanks to William the Conquerer, the next time you are stuck for the right word just try using the French word and giving it an English pronunciation – statistically you have a 60% chance of being right!

Bonne Chance! –as they say in English 😉

Time to do the needful???

Time to do the needful???

You never get a second chance to make a first...

You never get a second chance to make a first...

Letter Writing ... Out of Date?

Martin Baker worked for over 30 years in the British Police Service. In the latter part of his career as a search planner, advisor and coordinator in some very high
profile cases in the UK and overseas. This role taught him management, decision-making and negotiation in some very intense, time critical environments. He has over 10 years of experience as a qualified trainer and teacher in an array of specialist subjects but most recently in Teaching English as a Foreign Language and Cross Cultural Communication.

He takes pride in delivering high quality, value for money and ethically and socially responsible training.

Martin Baker worked for over 30 years in the British Police Service. In the latter part of his career as a search planner, advisor and coordinator in some very high
profile cases in the UK and overseas. This role taught him management, decision-making and negotiation in some very intense, time critical environments. He has over 10 years of experience as a qualified trainer and teacher in an array of specialist subjects but most recently in Teaching English as a Foreign Language and Cross Cultural Communication.

He takes pride in delivering high quality, value for money and ethically and socially responsible training.